The great thing about special effects shots is that the model you're shooting only has to look good from the angle you're using, and under the lighting that will be used in the shot.  Here's what the model setup for ANALOG #9's cover looked like in normal room lighting, without the background: 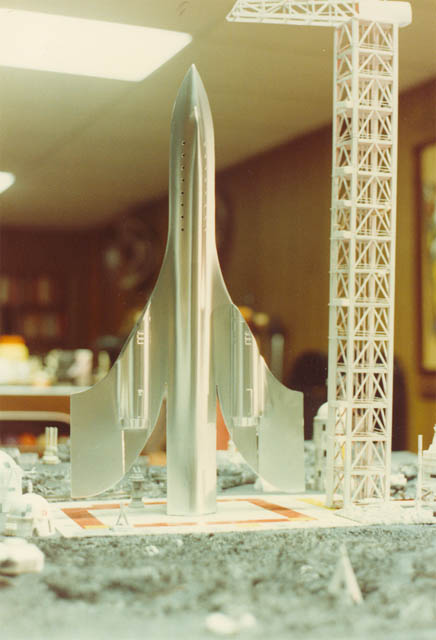 This doesn't really show how crappy the lunar surface looked, because it's shot from a low angle.  It's also a quick snapshot, with almost no depth of field, so the foreground is out of focus.  Here you can see that we set up the model on top of either a pool table or ping pong table (I don't remember which) in Lee's parents' basement.

Here is the special effects photography crew clowning after the shoot: 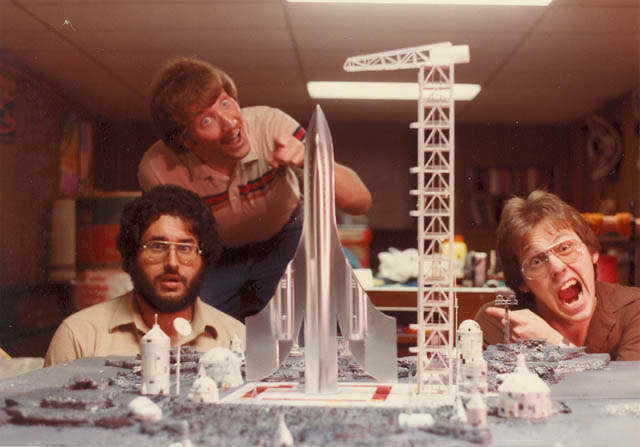 That's Lee Pappas on the left with his short-lived beard, Tom Hudson above Lee with his short-lived hair, and Editor Jon Bell on the right.  This is the shot where you can see how truly crappy the model was for this cover -- We literally had chunks of gray painted styrofoam just scattered over the surface of the tabletop!  It didn't matter though because when shot at a low angle, with low-angle lighting from the side, it looked just fine, crummy styrofoam, HO track lights and all.

I was hoping that I had a photo somewhere showing the high-tech light-on-a-stick technique we used for the launch pad and building lights, but so far nothing has turned up.  If one does, I'll add it to this page.

Back to Fun Stuff